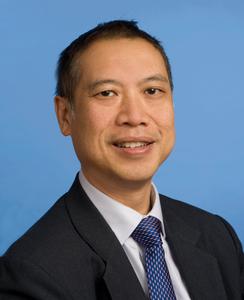 Prof. Koh obtained his primary medical degree in Singapore (1989).  Following further training in internal medicine and diagnostic radiology, he was awarded the fellowship of the Royal College of Radiologist (UK) in 1996. He was appointed to the position of Consultant Radiologist in Functional Imaging at the Royal Marsden Hospital in January 2008 and was conferred the title of Professor in Functional Cancer Imaging at the Institute of Cancer Research in 2015.

Prof. Koh’s current clinical and research interest is in the development and application of functional imaging techniques for tumour assessment. He has a particular interest in developing and evaluating diffusion-weighted MR imaging in the body (DWI), to enhance and improve the ability to detect and characterise tumours, as well as to monitor the effects of conventional and novel therapeutics.

In addition to his research, Prof. Koh lectures regularly at numerous conferences and courses, including the European Congress of Radiology (ECR), European School of Radiology (ESOR), European Society of Gastrointestinal and Abdominal Radiology (ESGAR), International Society of Magnetic Resonance in Medicine meetings (ISMRM) and the Radiological Society of North America (RSNA) meetings. He was named outstanding teacher by the ISMRM in 2008, 2009 and 2012.

Prof. Koh was elected a Fellow of the International Cancer Imaging Society (ICIS) (2007) and appointed Honorary Treasurer of the Society in 2011. He is series organiser for the ICIS interactive courses, a hands-on teaching course; and also the course organiser of the Body DWI course on behalf of the ESMRMB School of MRI.

Prof. Koh is currently an associate editor for Radiology, and also reviews regularly for other radiological and medical journals. He was awarded the Barclay Medal in 2013 for his contributions to the British Journal of Radiology. Prof. Koh has had numerous publications in peer reviewed journals and textbooks.  In 2009 he co-edited a book, ‘Diffusion-weighted MRI: Applications in the Body’, published by Springer.